Problems With Pouring Grease Down the Drain and Some Solutions 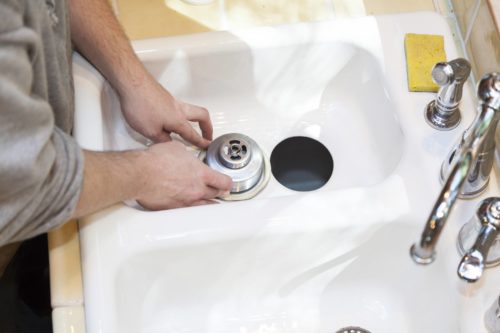 Do you often cook with oil or prepare food items that generate a lot of grease, such as bacon? You may be tempted to dispose of the extra grease down your kitchen drain while cleaning up. Our team at Beyer Plumbing would advise you against that. We’ve seen it cause a lot of problems for our customers in Selma and throughout the San Antonio area.

Most people have heard not to dispose of grease and oil down the kitchen sink drain, but many of them don’t adhere to that recommendation. They figure that a bit of grease won’t cause too much damage as long as it’s not a large amount. However, that type of thinking will only lead to plumbing problems down the road. We’ll go over all the reasons you shouldn’t pour grease down the drain, proper disposal of it and some remedies if you’ve already made this mistake.

5 Reasons You Should Never Put Grease Down the Drain

As we’ve already pointed out, this is something you shouldn’t do even once. Let’s discuss why.

Grease melts into a liquid state when hot. However, grease doesn’t remain in a liquid form for long. After the grease cools, it will solidify and turn into a sticky solid, taking up much more space. If you have a septic tank, the solid material will fill up the tank instead of flowing out into your drainage field, and you will need to get cleaning more often than usual.

Cooking oil sticks to your plumbing. As you dispose of food waste and other items, they will stick to the oil and accumulate into a large blockage instead of flowing through to the end of your drain pipe. Sometimes, the grease builds up on top of itself, growing in size every time more grease finds its way down the drainpipes.

3. Grease Can Create a Drain Clog

Over time, the grease buildup and the items that stick to the oil may create a blockage in your drain. You may notice that your plumbing doesn’t drain as quickly as it did before. You may also notice sewage backup entering the home. Finally, you may even smell the clog, although a foul odor coming from your drain can have multiple causes. Since grease comes in both liquid and solid form, a grease clog can develop anywhere in your drainage system from one sink to the sewer line or septic tank.

4. It Can Damage the City Sewage System

As we mentioned, grease can build up deep in your drainage system. In fact, it can develop outside of your property and get into the city sewage system. The city then must spend a lot of money to clean the system removing the grease and fat from the rest of the waste.

Pipes, plastic pipes in particular, can only withstand a certain amount of heat. When a plastic pipe experiences excessive heat, it can damage the material of the pipes, causing leaks. You shouldn’t pour grease down the drain at all, but you certainly should avoid doing so immediately after you take it off the stove. Grease for frying food can exceed temperatures of 300 degrees, and most plastic pipes can’t handle temperatures higher than 140 to 200 degrees. Even worse, grease has a tendency to retain heat for quite some time before it cools down. Copper pipe, steel pipe, and iron pipe can handle higher temperatures.

Instead of pouring grease and oil down the drain, collect it in containers in its liquid form and throw the containers out in the garbage once they get full. Since you probably don’t want containers half-full of fat in your kitchen, find a place outside or in your garage to keep the containers until it’s time to throw them away. Be sure to use containers that can withstand high temperatures if you plan to pour the grease into them while the liquid is still hot. Alternatively, you can wait for the grease to solidify and remove it from the pan with a paper towel.

Install a grease trap underneath your kitchen sink and use it. A grease trap is a container that collects grease almost as soon as it goes down the drain so that it doesn’t continue through the rest of your drainage system. It collects the grease while allowing the liquid through. You will need to clear the grease trap periodically and be careful with open flames around it since grease is highly flammable.

You should clean your kitchen sink drain regularly using a drain cleaner or a drain snake. If you don’t have a flair for plumbing DIY, you can schedule annual plumbing maintenance that will include drain cleaning. The idea is to clean any developing clogs before they grow into something damaging.

Create a clear grease disposal plan. People in your household won’t be as inclined to pour grease and fat down the drain if you have a clear and convenient disposal system available. Start by getting everyone on the same page. Explain your expectations and the reasons for your system. Keep containers near the sink for easy access as well as clear instructions for what to do with the containers until they become full.

One of the most common solutions for treating a grease clog involves using a drain cleaner specifically designed to attack it. Drain cleaners with caustic chemicals and acid will deteriorate the toughest clogs, but these harsh chemicals can also cause corrosion of your pipes, especially with regular use. Slightly less powerful drain cleaners use less harsh chemicals, such as bleach. While they won’t cause as much damage, they will still deteriorate your pipes to some degree.

Use natural enzymatic drain cleaners as part of your regular plumbing maintenance routine to hopefully prevent a clog from developing. These drain cleaners are safe for your plumbing, even with regular use. However, natural drain cleaners rarely have enough power to attack a stubborn clog. If you don’t want to go to the hardware store, you can make your own drain cleaner at home by mixing baking soda with white distilled vinegar. When combined, the two ingredients create a chemical reaction that eats at the clog. Whether using a drain cleaner with chemicals or employing baking soda and vinegar, always flush the material thoroughly with plenty of water to avoid leaving hazardous materials on your pipes.

Using an Auger to Clear an Obstruction

A powered auger is a drain snake that maneuvers through your plumbing system until it reaches the clog. Once it reaches the clog, you will power the device to break up the clog at the source. Most augers reach 25 feet into your drain pipes. If the clog exists deeper than 25 feet, you will need to call for professional drain cleaning services.

Rely on Your Local Experts

If you require drain cleaning services in Selma or anywhere else in the San Antonio area, turn to us at Beyer Plumbing. Ours is a family-owned and -operated business, and we’ve been handling problems like that for the people around here for over 30 years. You can also count on us for all plumbing repairs and replacements, water heaters, water softening systems, leak detection, camera inspections, and more. We guarantee our work and always make sure the customer is satisfied. Call us today to schedule an appointment.